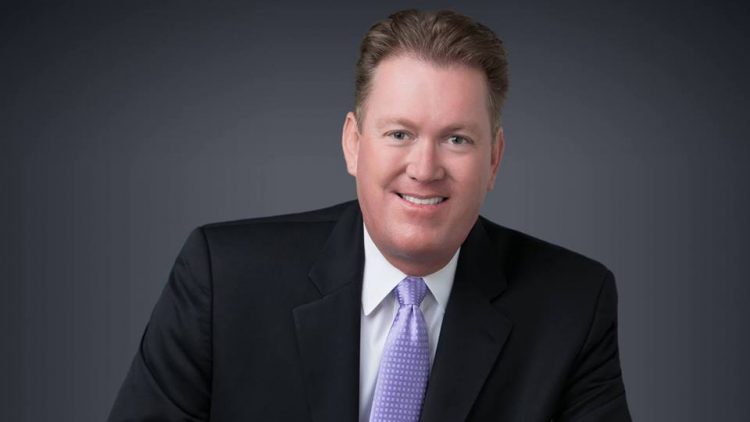 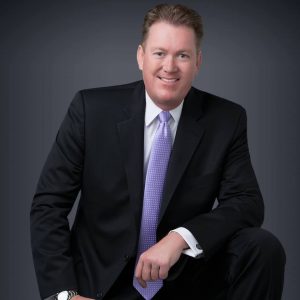 There is one true giant in the world of real estate his name is Stuart Thomas. Not only does he stand 6’8” tall, Stuart is also the broker owner of one of the truly great real estate organizations named RE/MAX Select One. A group of Orange County offices packed full of many of the best Realtors in the business.

Unlike other broker/owners, Stuart does not come from a family who were in the real estate business. His journey to the world of real estate starts across the ocean. He and his family moved from Manchester England when he and his brother were still very young. They settled in Fountain Valley.
After college, Stuart spent nearly ten years in the tech industry with three of those years spent living in Northern Virginia doing federal sales. He called on the CIA, FBI, NSA and DOJ among others.

Stuart transitioned into the world of Real Estate in the early 2000’s. RE/MAX Select One was born in March of 2003 just in time to catch the tail end of the biggest real estate boom in the history of the country. The original RE/MAX Select One office is located on Warner Ave. in Huntington Beach.

A few years later during a time when other offices were downsizing due to the mortgage meltdown, Stuart saw an opportunity. As he puts it, “Careers are made in a down market.” In late 2007, RE/MAX Select One opened its doors in Dana Point to provide a home in South Orange County for Realtors who saw their current office close their doors. This bold move among other things earned RE/MAX Select One the “2007 Office of the Year” award from RE/MAX of California and Hawaii. The next year, Stuart followed that award with being named “2008 Broker Owner of the Year” by RE/MAX of California and Hawaii. In the next few years as the market continued to struggle through the great recession, RE/MAX Select One Downtown Huntington Beach opened its doors in 2010 This was followed by RE/MAX Select One opening its doors in Laguna Niguel in 2012.
A small office in San Juan Capistrano capped off the five office locations. There are future growth plans for RE/MAX Select One. 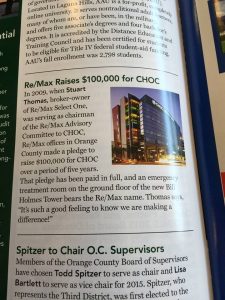 Giving back to the community is at the very heart of Stuart Thomas and the entire RE/MAX Select One Organization. In 2009, after a lunch meeting with the worldwide President of RE/MAX International, Stuart decided to commit all the offices to become Miracle Offices. They would donate money from commissions earned on closed transactions to the Children’s Miracle Network Hospitals. Through the Miracle network, all the money would be directed at CHOC Children’s Hospital. Stuart was later named Chairman of the RE/MAX Advisory committee to CHOC and made a bold pledge on behalf of other Orange County RE/MAX offices. Together, these RE/MAX offices would collectively raise $100,000 for the new tower at CHOC. In three years’ time, these amazing RE/MAX offices had met the obligation and there is a RE/MAX room in the ground floor of the new tower. This was all done during one of the roughest times in our nation’s history. Stuart is very proud that RE/MAX Select One has been named a “Miracle Office” by the Children’s Miracle Network every year since 2009. He accepted the Miracle Maker award from CHOC on behalf of RE/MAX Select One. 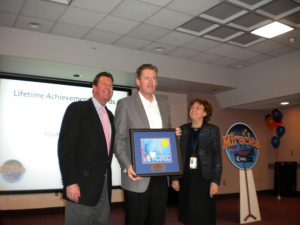 He later accepted the CHOC Children’s Lifetime Achievement award on behalf of RE/MAX Select One. Kid’s don’t stop getting sick in a down market. Therefore, RE/MAX Select One will keep working to make a difference.
In 2010, Stuart had an idea to get the local real estate community in Orange County to come together to raise money for kids. Stuart approached a Broker Owner who he has great respect for. After laying out the vision to Broker Owner Frank McDowell who founded STAR Real Estate in 1977, Frank immediately saw the positive impact the real estate community could do. He agreed to partner with Stuart on the inaugural fundraising event and this year will mark the 8th year that they, along with the amazing “A” team who tirelessly work behind the scenes, have teamed up to raise money for kids. This year’s event will be the third year in a row that money will be raised for the Huntington Beach Police and Community Foundation and the fantastic programs they have for the youth in the community. The first five fundraisers benefited Colette’s Children’s Home, Habitat for Humanity, Project Self-Sufficiency, Make a Wish Foundation and CHOC. These fundraisers truly are a team effort and have truly helped some amazing organizations.
Hiring the right type of people and following through with what you promise is the key to the success at RE/MAX Select One. Sharing the vision and getting buy in from their Realtors on the different programs the office is involved within the community is also important. At RE/MAX Select One, hiring one amazing professional at a time ensures that the quality of associate is high. RE/MAX Select One Realtors averaged $175,000 in gross commissions last year. RE/MAX Select One had one of their associates ranked 9th out of 60,000 RE/MAX Realtors in the United States in 2015 for gross commissions earned. The people they hire are self-motivated and true professionals. They don’t need to be managed but they get all the support they require and then some directly from Stuart. Some offices see agent count as the key. RE/MAX Select One does not. For this reason, turnover at RE/MAX Select One is low as compared to other offices. This can be attributed to many factors. Hiring Realtors that fit the RE/MAX model is first and foremost. RE/MAX Select One believes that the best person to talk about a listing is the listing agent. They direct every lead back to their listing agents. For this reason, the office is loaded with listing agents who control their farms and have true buyer’s agents as part of their team. As Stuart is fond of saying, “Lister’s last in this business.” 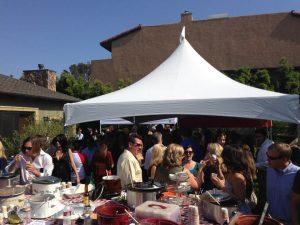 Since Stuart never worked at another Real Estate office before opening RE/MAX Select One, he does things a little differently. His offices don’t have regular meetings. They have mixers and important items of value are sent via email. They do BBQs for the office during the summer. 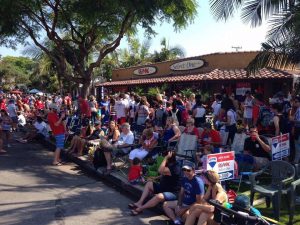 July 4th is celebrated with their associates and their clients at the office on Main Street watching the parade with a sausage and pancake breakfast. Stuart recognizes that their Affiliate partners such as lenders and Title reps are constantly paying for events that Realtors attend at no charge. As a way to show their appreciation for all the hard work their affiliate partners do, RE/MAX Select One for the past 11 years has invited Realtors from all offices to host an annual Affiliate appreciation day chili cook-off. Through it all, when facing hard decisions, Stuart uses a simple life rule. “Feed your family. Not your ego.” He has seen too many offices fail because the broker put ego ahead of common sense. He also believes that the associates are the ones who make the office. Not the broker. 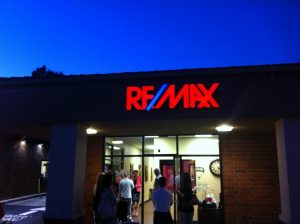 Lori McGuire of the McGuire Team at RE/MAX Select One in Laguna Niguel had this to say. “What a pleasure it has been to work with Stuart Thomas for nearly 10 years. I remember my original meeting with him when I was looking to move my business to a new broker. I thought immediately how charismatic, high-energy, focused on what he could provide me, and truly dedicated to providing the very best for his agents he exuded. Now nearly a decade later I can honestly say that he has been true to his word. It is a pleasure working with him knowing that he always has my back. He’s my biggest cheerleader and he lets me have the freedom to run my team the way I need to.” 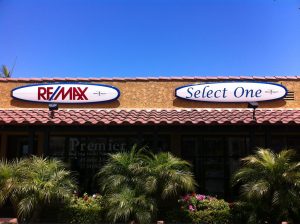 Kimber Wuerfel of RE/MAX Select One’s Downtown Huntington Beach office shares a few memories. “When I met Stuart, he was a man with a dream. It was 2004. Against all odds he opened his first RE/MAX office in Huntington Beach. The real estate market in Orange County and especially in Huntington Beach was dominated by (First Team), a local brand with a solid hold on the market at the time. I moved from that brand to join Stuart on his adventure. I watched Stuart make personal and professional sacrifices on a daily basis. His wisdom, determination and solid business sense has made RE/MAX Select One the go to brand in Orange County.” 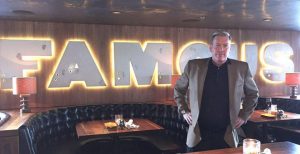 Stuart has served as a director with the Orange County Association of Realtors and serves on many other boards. He has written and sent out a motivational message titled “Monday’s Cup of Motivation” for close to 350 weeks in a row. Simple reminders of what truly matters in life. With that said, the thing that Stuart is most proud of is being a dad to his son Grant Thomas. He is a junior on the swim team at Mater Dei and plans to pursue a career in finance. Grant’s mom Simone Kelly who is a fantastic lady and amazing mom is the founder and CEO of Grason’s Estate sale company in Orange County. They have grown to be the number one estate sale company in the country and also sell franchises. Stuart’s mom Carole Thomas recently celebrated 40 years working at the Huntington Beach Unified School District. His older brother Simon is in the lending business in Arizona where he lives with his wife and three amazing kids. Stuart and Simon’s dad John Thomas passed away nearly a decade ago but his lessons on being a father are still alive in both his sons. 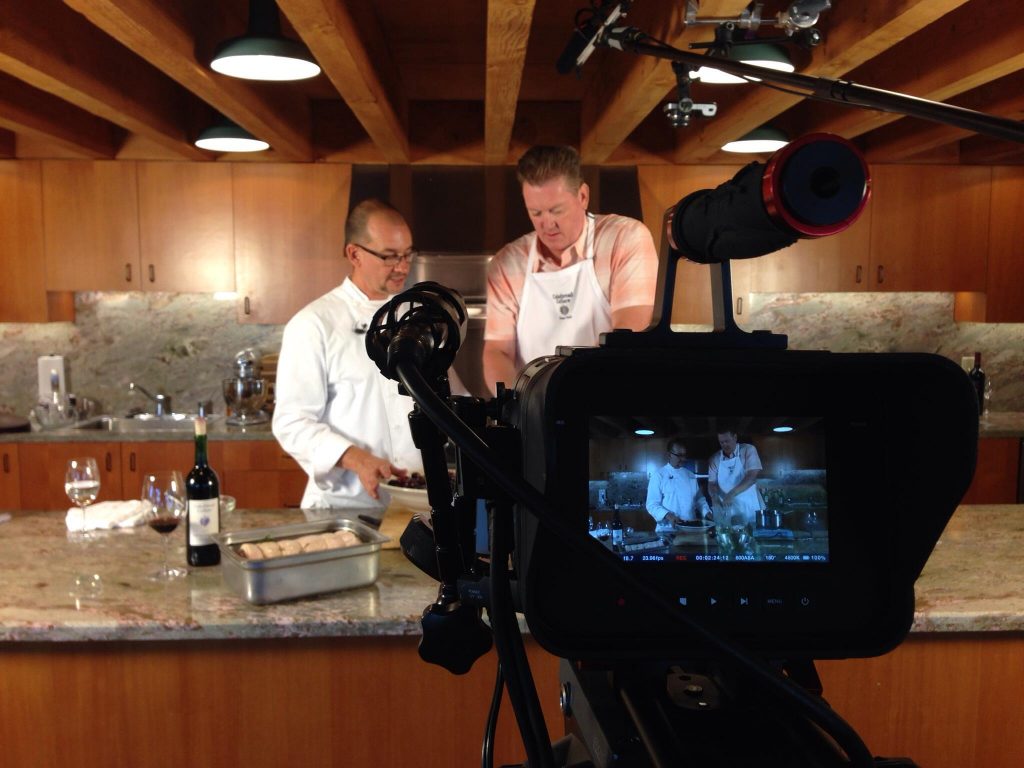 When Stuart is not working or with family, he enjoys cooking and a great glass of wine with great friends. Stuart was flown up by the Cakebread Family in NAPA Valley to be the first non-Cakebread employee ever featured in a cooking video at Dancing Bear Ranch. He is passionate about food and music. Stuart has learned that life is short and things can change in an instant for better or worse so appreciate what you have right now. Surrounding yourself with great positive people, friends and family is everything. Keep moving forward!! 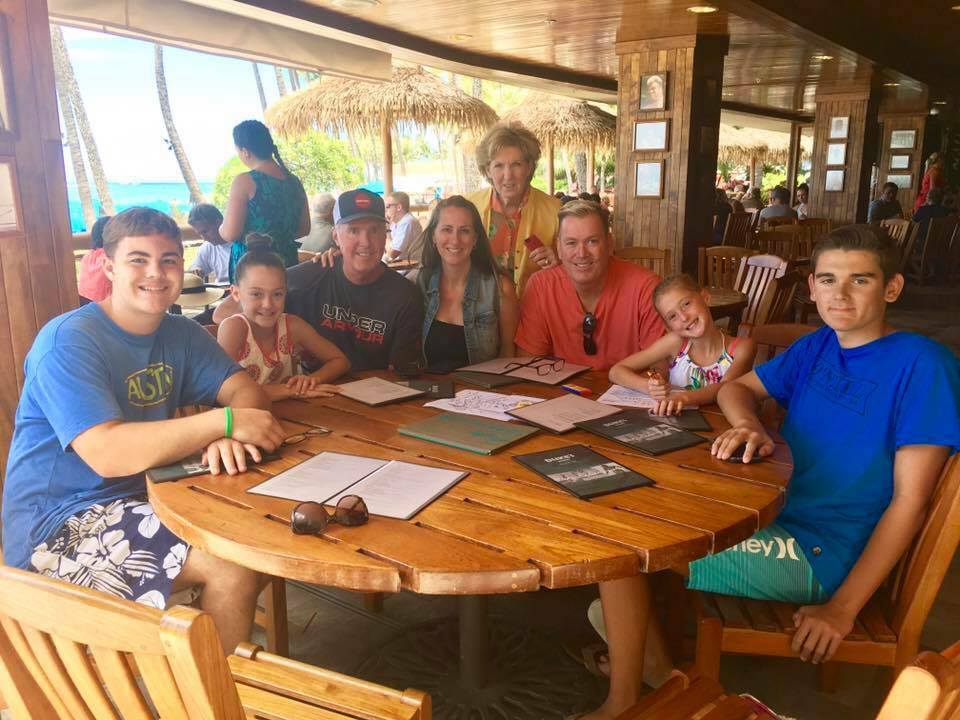