As you can see my fondness for cars began at a very early age back in time when photographs were only in black and white. I didn’t know it at the time however, my soon to be brother Robert was being created and that day, I was pulling two people in my first car and I didn’t even know it! I was told much later in life that my brother arrived about four weeks after my dad took this photo of the World’s BEST MOM and her later to be car crazy son! 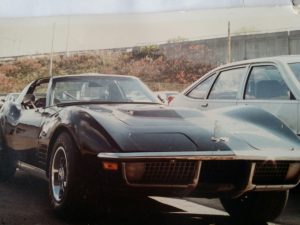 The most exciting thing about living with my parents when I was young was that my dad had also been a car enthusiast. That was real cool when ever I had the itch to upgrade the cars that I was driving, when ever I earned the extra money!  I never received any opposition from my dad. My mom tried to slow me down on some of my purchases but, my dad never stood in my way. As a matter of fact it was my dad who found my very first Corvette! It was a 1959 Corvette with two tops. It was a convertible with a removable hard top. Long story short the car was gorgeous and of course I didn’t have enough money to purchase it! But dad came through! I actually think he was living his life through mine by helping me pay the difference. I think as a parent myself, I sometimes reflect on my own two sons by being excited for some of the things they did. For example, when my two sons had received their Eagle Scout Badges when they were Boy Scouts, I was standing there feeling like I was getting the award, and I felt that way twice! Parents do those things. Well hats off to my dad because, I really wanted that Corvette!

As the years passed I spent countless hours doing all kinds of restorations on older Corvettes which I had purchased only to drive, flip and make a profit. My best friend Ray had a garage. While many of our other friends were earning extra money at the Shuttle Meadow Country Club back in Connecticut caddying, Ray and I were rebuilding muscle cars mostly Corvettes however, many Chevelle’s and a few Oldsmobile 442’s and plenty of Mustangs!

The video below are some photos I took at a couple of car shows here in Sunny California. I had them put together for your enjoyment by Home & Realty Magazine’s programmers. I hope you enjoy the show we titled it California Cars!

Like a kid in a candy store, today was a great day for me! I spent my afternoon on the grounds of Cottonwood Church’s front lawn in Los Alamitos meeting some of the coolest California car people around! This show was by far the largest car show that this Connecticut guy had ever seen! Six wild elephants couldn’t pull me away from all of the variety displayed with such horsepower and grace combined.

It was absolutely wonderful to see several of the cars that I personally owned back in my home town growing up with my best friend Ray who btw is also, God Father to my eldest son Jared! Anyway, Ray’s dad owned United Auto Service a full service garage and we were the kids who grew up in that garage rebuilding engines and transmissions. As time passed we both learned how to do our own body work and we even painted our own cars. We didn’t have much money so every car we purchased was always used however, we always brought them back to new again to resell make a profit and start the process all over again. It’s kind of like realtors who flip houses, instead we flipped cars!

After the death of his dad, Ray took over United Auto Service only to magnify the business into one of the best automotive garages around! So as you can see many great memories come back to me each and every time I attend a car show, but living in sunny California has always been my dream! California is the best place in the world, and most definitely for a car show!

Today I had the pleasure of meeting a computer engineer named Brian Corpus at the show! A real nice gentleman with a powerful knowledge of 1956 Chevrolet’s. I promised Brian that I would create a quick post on today’s greet and meet and most importantly, show everybody his prize 1956 Chevrolet restoration! Being cut from the same cloth as Brian, we had a great automotive conversation discussing many of the steps which took place in his complete overhaul. I have several pictures of Brian’s “56 Chevy” and I am proud to introduce you to Brian and this wonderful car he has built!