I have been commissioned to re-paint my classic “Revelation of Peace” painting, an original oil painting comprised of 4 great men who each became icons of Peace in their own unique ways. Originally created in 2010 in collaboration with philanthropist Gilles Sensenbrenner, this painting was created to use in fundraising efforts for various charities worldwide. A copy of the original was given to the estates of each of the figures in the painting, Nelson Mandela, Gandhi, MLK, and Dalai Lama. At an event in 2014 I was seated directly in front of Dalai Lama, in a room of 20,000 people and given the opportunity to meet with him to present his painting in person. Unfortunately due to security issues at the event, all security clearances were removed and I wasn’t able to receive and introduction, however when Dalai Lama spoke of the necessity of “Artists” in the community to spread the message of peace, love and hope through their words and works, he clearly raised his hand and nodded towards me as I held the painting in the air for him to see. This was perhaps the greatest moment of my art career to date.

The prints were given to countless charities thereafter, raising endless monies for various philanthropic entities.

How fitting that now I’ve been commission to re-paint an original oil on canvas copy for the newest Mayor of Washington DC, Muriel Bowser. She is a young and beautiful black woman, raised in Washington DC, and inaugurated on January 2, 2015.

Her words of peace echo those of these great men depicted in this painting;

You probably know by now that I’m fiercely loyal and disciplined — and not easily moved from a winning plan.”

And we’re going to make sure, we’ll work together so that the violence that has shaken so many of our communities comes to an end. Little Jayden should not be scared to go home, dear Relisha should be doing the things that little girls do, and no man or woman should live with violence in their home.”

We pledge ourselves to liberate all our people from the continuing bondage of poverty, deprivation, suffering, gender and other discrimination.

“I have faith that we will do it together with a lot of hard work. We will build a city, worthy of this occasion and your great expectations.”

A small body of determined spirits fired by an unquenchable faith in their mission can alter the course of history.

I bet you don’t know this though one of the single biggest surprises and delights of this campaign was the reaction I got from little girls—the 8 year olds for sure—they watched me, they cheered me on and they inspired me to keep pushing, to live up to their hopes and dreams.

It is very important to generate a good attitude, a good heart, as much as possible. From this, happiness in both the short term and the long term for both yourself and others will come.

While these quotes could all be interchangeable the message is clear, Muriel Bowser emanates a message of peace, strength, and hope reminiscent of the words of these 4 great leaders of peace. I am truly blessed to be able to re-create this painting as a gift to her and look forward to the day I see her standing next to my creation of these 4 amazing men she emulates so well. 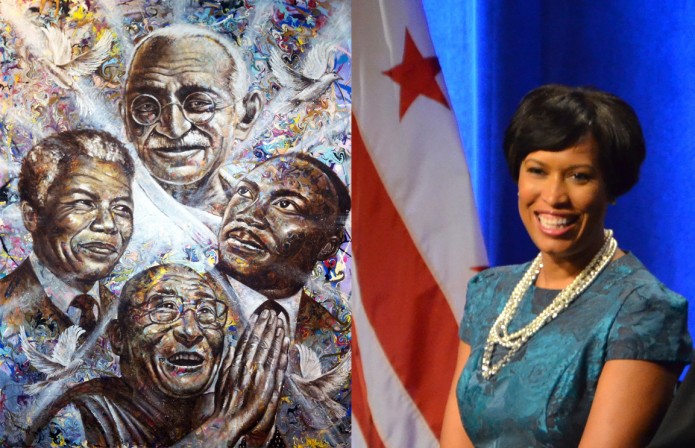