It is a pleasure to write this month’s Huntington for Fun column on Huntington Beach’s largest and well known events… The Vans U.S. Open!!! Each year this world wide event is held just in front of our favorite Dukes Restaurant on the south side of the pier, located at Main Street and Pacific Coast Highway. This year the awesome event was held from July 25 – August 2, 2015. Not only is the Van’s U.S. Open good for the vendors of Huntington Beach, it brings surfers from all over the world together in one competition… men and women alike. The people of Huntington Beach work very hard to accommodate all of the surfing fans that come to this event. From hotels to restaurants and shopping, Huntington Beach has it all. It is a giant festival on the sand… takes 2 weeks to assemble and 1 week to disassemble. 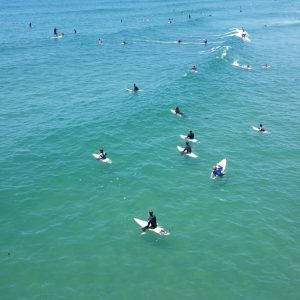 The Vans U.S. Open has not always had this title. It all began in 1959, and was called the West Coast Surfing Championship. This first year, a man named Jack Haley won first place, along with Linda Benson for the women’s championship. In 1964, the competition was renamed the U.S. Surfing Championship and in 1966 Huntington Beach’s very own Corky Carroll won this competition. In 1982, this famous competition was renamed once again, to the OP Pro, sponsored by none other than Ocean Pacific. I’d say this is when this competition really began to get popular! Soon to follow in 1983 and 1984, Tom Curran took away the title… who doesn’t love Tom Curran…? In 1994, this famous surfing competition was named what we know it now, the U.S. Open of Surfing… and in 1996, Kelly Slater took the title.

Although this surfing competition brings in a ton of revenue for our city, it also has its down side for the locals. People come from all over the world to experience this awesome event. The event has traditionally been held on Labor Day week end and has never been a problem. Not only did it have the world’s largest surfing competition, but it also included skateboarding, BMX biking, rock concerts and lots of give-aways from the vendors. In 1986, the city of Huntington Beach experienced horrible riots during the OP Pro. Over 25 years ago, the city turned into chaos with glass bottles being thrown and a cloud of sand over acres of beach. Yes, this was a horrible time for our city but we do not give up easily. The change was made to no longer hold the event on Labor Day Week End…. Instead it is now the end of July into the beginning of August. They have omitted all concerts as well. No more live music… The focus is now back on surfing, where it should be. They still have the BMX biking and skateboarding… It would be a shame if bad behavior caused such a great even to end. Fortunately, we here in HB care and would not let that happen! 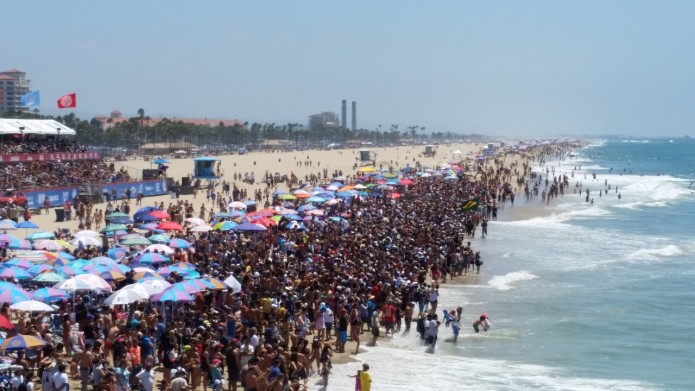 An extension of the U.S. Open can be seen directly across the street from Dukes in front of Huntington Surf and Sport… On the corner of Pacific Coast Highway and Main Street, there is a statue of Duke Kahanamoku… located in the concrete around this monument is the Surfers’ Hall of Fame. This is where surfing legends have been honored by immortalizing their hand prints, footprints and signatures in the sidewalk… similar to the Hollywood Walk of Fame in Hollywood, CA. Some of the famous surfers in the Hall of Fame include Kelly Slater, Rob Machado, Jack O’Neill, Robert August and Laird Hamilton. If you ever have the chance, you should walk over them and look at the names… it’s a fun thing to do!

All in all, the Vans U.S. Open Surfing Competition is a big winner and loved by men and women large and small, young and old! It draws over 500,000 people, bringing in revenue of $16.4 million to the city of Huntington Beach and $21.5 million to Orange County. This money helps to pay for all of the extra security it takes to keep our city safe during this busy time of year. The HB Police cover the streets with police on foot, horseback, motorcycles and cars. They do a great job keeping the city under raps while still enjoying themselves and letting others have fun! They have their hands full for sure!! Here we are…. 56 years later from the very first Huntington Beach Surf Championship… still going strong!!! Thank you Huntington for being so much fun!!!